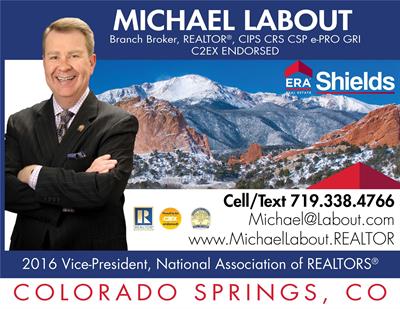 Broker Associate
ERA Shields Real Estate
6385 CORPORATE DR, COLORADO SPRINGS, CO 80919
http://www.MichaelLabout.REALTOR
(719) 593-1000 Contact Me Connect with Me
This REALTOR® is a member of the National Association of REALTORS®

Michael has been a residential REALTOR since 1982 in Colorado Springs, Colorado & has been with ERA Shields Real Estate as a top-producing agent since 1986 & is the Branch Broker for the North main office. He believes in giving back to his Associations & profession & has served at the local, State and National level. He is an Officer for the National Association of REALTORS in 2016 as serves as Vice President & a member of the Leadership Team & the Board of Directors with over 1.1 Million members & graduated from NARs Leadership Academy. He holds the CRS, CSP, e-PRO & GRI designations. In 2007, Michael was honored as REALTOR of the Year for PPAR with nearly 4,000 members & in 2009 he was chosen & recognized as "REALTOR of the Year" for the Colorado Association of REALTORS. Married to wife Laurie for 31 years, Michael and Laurie sponsor cadets for the U.S. Air Force Academy.